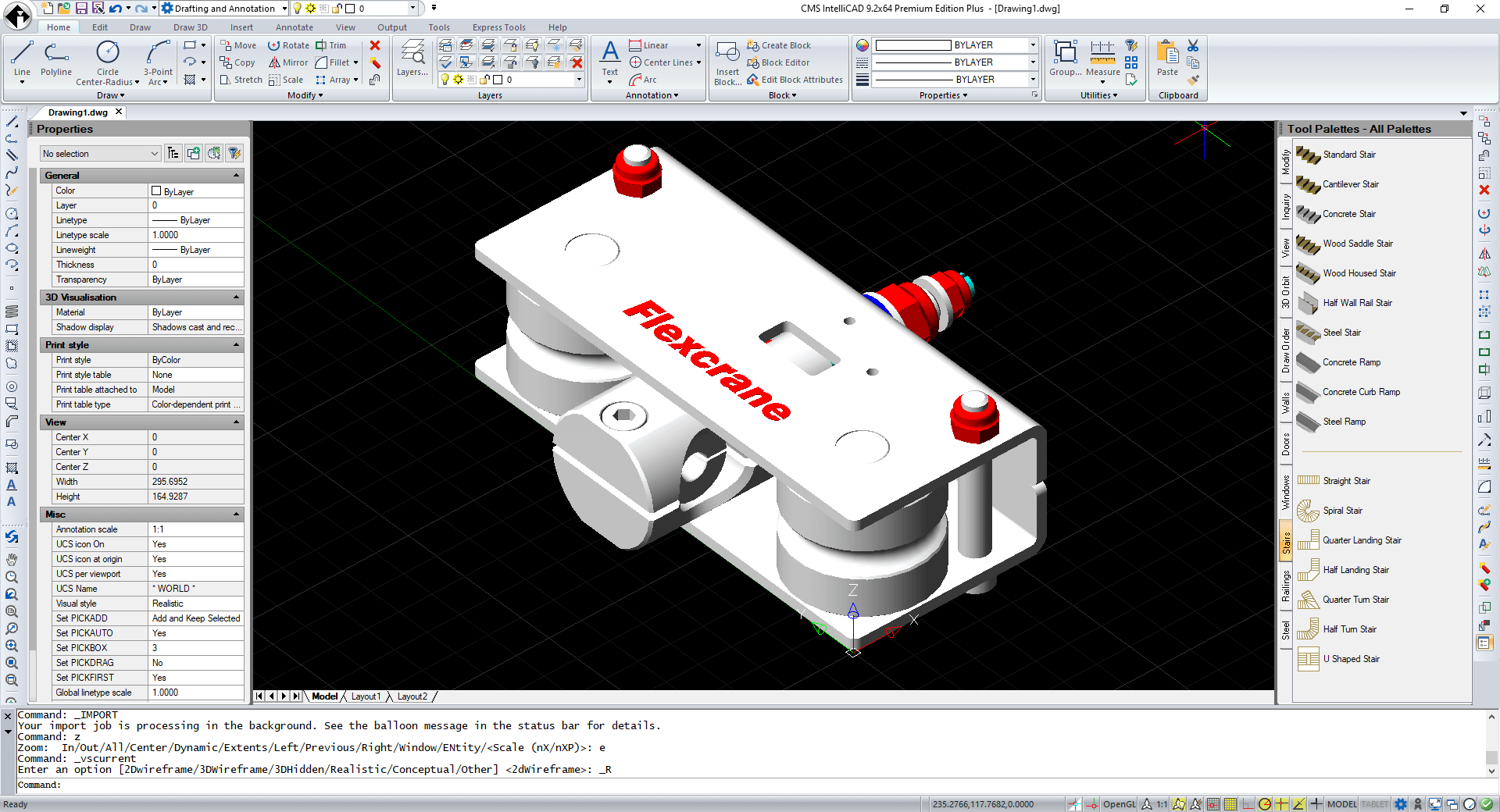 CMS IntelliCAD® 9.2 is a major release that, again, includes many new features and improvements with useful & high value.

IntelliCAD 9.2 is a major release that includes many new features and improvements including: import and export IGES and STEP format files (for Premium Edition Plus - PE Plus), delete and combine duplicate or overlapping entities using the Overkill command, use right-to-left fonts, choose from additional list types for multiline text, undo or redo a selected range of actions, thicken surfacesand meshes to convert them to three-dimensional solids (for Premium Edition Plus - PE Plus), and publish a drawing to the newly supported .dwf/.dwfx published format. You can also set up automatic publishing to create .pdf, .dwf, or .dwfx files when you save or close a drawing.

Selection includes a collection of new features. The new Selection Filter pane, similar to the Properties pane, displays all entities in a drawing and allows you to filter and select entities by layer, color, entity type, and linetype. Polygons, rectangles, and break lines have additional grips and properties for smart editing, and selection cycling is available which makes it easier to select entities that overlap.

CMS IntelliCAD® 9.1 is a major release that includes many new features and improvements.

One of the new major capabilities of CMS IntelliCAD 9.1 is attaching digital signatures to .dwg files and validating them. The interface on how to do it has been reworked with CMS IntelliCAD 9.1. Another is the new Block Editor that makes it easier to create and edit blocks. One more is creating palettes that contain blocks, similar to using a stencil for easily adding shapes to a drawing. There is also a new type of selection grip for users working with schematic drawings where precise scale or sizing is not required.

More CMS IntelliCAD 9.1 features include: print and publish drawings directly to PDF, click keywords at the command prompt, use a Start Page when the program launches, single-click to hide many user interface items at once and increase the drawing area, synchronize viewports, convert to mesh, convert to surface, show and hide edges of three-dimensional entities, view and edit system variables in the new System Variables Manager, and much more. 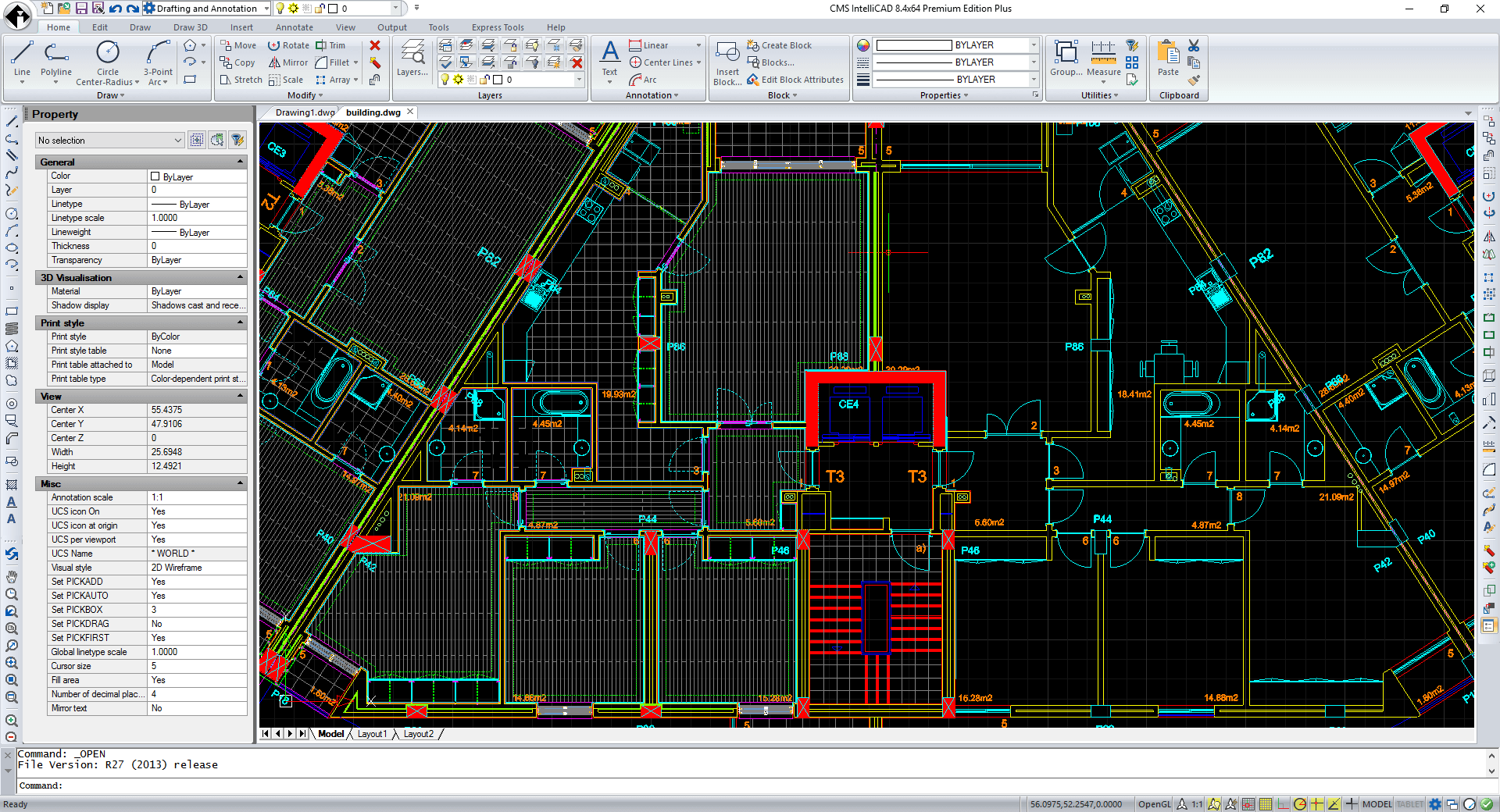 CMS IntelliCAD 8.4 Premium Edition (PE) is a major release that includes many new features and improvements.

CMS IntelliCAD 8.4 Premium Edition (PE) boosts performance during screen redraw and while snapping in files with underlays. Running IntelliCAD on 4K monitors and switching between monitors with high resolutions is now supported.

Another new feature is found in the updated Customize command which allows users to customize the user interface with less effort and share custom user interface settings easily between files and computers. You can drag-and-drop settings to customize menus; the ribbon, application button, and quick access toolbar (for IntelliCAD versions that support a ribbon); toolbars; keyboard shortcuts; and aliases.

CMS IntelliCAD 9.0 is a major release that includes many new features and improvements, including native support for opening, editing, and saving 2018 .dwg files.

CMS IntelliCAD 9.0 boosts performance in many areas, with the most noticeable increase in speed during file saves. Now only modifications need to be saved to .dwg files, which makes for extremely fast saving especially for large .dwg files that contain only a few changes. Also some lingering issues related to running IntelliCAD on the Fall Creators 2017 Microsoft® Windows® update were fixed.

CMS IntelliCAD PE PLUS that now supports BIM files import as underlays, users can now attach .rvt/.rfa files; snap to, explode, and control display for categories, stories, and views in attached .rvt/.rfa files; import .ifc files as architectural entities (in addition to attaching these file types as before); and draw AEC entities such as walls, windows, doors, openings, and slabs.

Additionally, CMS IntelliCAD 9.0 is also now including the option to add digital signatures to .dwg files.

Other improvements and fixes are found in performance, working with files, drawing and editing, printing, and customization.